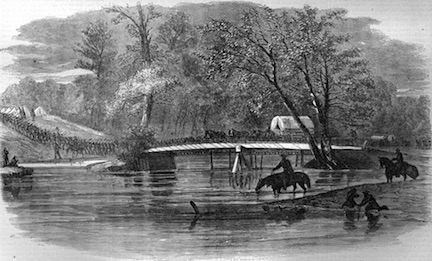 Federal forces cross the Ny River. The column of troops in the left of the image ascend a slope that takes them past modern Stevenson Ridge.

One hundred fifty-five years ago today, a portion of the Federal army appeared along the Fredericksburg Road–modern day Rt. 208–and moved southwest toward Spotsylvania Court House. The previous day, three-fourths of the army had collided with the Confederate Army of Northern Virginia to the west along Brock Road, where Confederates successfully bottlenecked them. The Federal army was so huge, though, that a quarter of it had to circle around to the east and come to the battlefield a different way–down Fredericksburg Road.

That portion of the army, the IX Corps, was commanded by the genial but mediocre Maj. Gen. Ambrose Burnside. Burnside sent his first division forward under Maj. Gen. Orlando Willcox with orders to clear the way into the village. Willcox’s men splashed across the Ni River–then sometimes called the Ny River–where Confederate cavalry raised an alarm. The previous day, the single brigade of cavalry was the only thing blocking the road, but by May 9, the Confederate division of Cadmus Wilcox had moved into the area to block the road.

Thus, it was Willcox versus Wilcox for control of the back door into Spotsylvania Court House.

Federals deployed across the property that is now Stevenson Ridge and advanced. Confederates checked them at almost every opportunity, although much of the fighting was back and forth. At one point, nearly the entire Federal line collapses, but a rally by a regiment of Pennsylvanians put the Federals back into the fight, eventually capturing all their lost ground and pushing on closer to Spotsylvania.

By early afternoon, Burnside was content to consolidate his position rather than risk further fighting. He was far from the rest of the Federal army and so, if he got into trouble, he would have a tough time getting reinforcements. His play-it-safe attitude may have seemed prudent at the time, but a more aggressive commander could have used the far superior Federal numbers to force the Confederates back before they had time to consolidate their own position. As it was, Burnside’s delay allowed Confederates to dig in and more reinforcements shift into the area.

Burnside would instead try to make a strong push tomorrow.