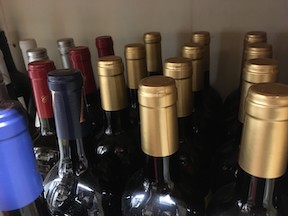 In his memoir Recollections of a Confederate Staff Officer, G. Moxley Sorrel recalled an incident from just before the battle of Fredericksburg that might be of interest to our wine enthusiasts.

Just before the battle, which took place on December 13, 1862, the Federal army occupied the city. Townsfolk knew the Yankees were coming, and some of their preparations resulted in unexpected libations for some of the city’s Confederate defenders. Sorrel recounted a story about “the old wines of the good people of Fredericksburg.”

They suffered in the fortunes of war. A few nights before the opening of the battle, which was then imminent, considerable quantities of fine old Madeira and other varieties were taken out of cellars and bins, and sent by the citizens to our fellows in camp, equally ready for drink or for battle. It was known that the town would be shelled and occupied by the Federals, probably looted and plundered; therefore it was thought safest to see priceless old vintages passed around campfires and quaffed in gulps from tincups. Of course the men would have better liked whiskey, but they did not refuse the wine.