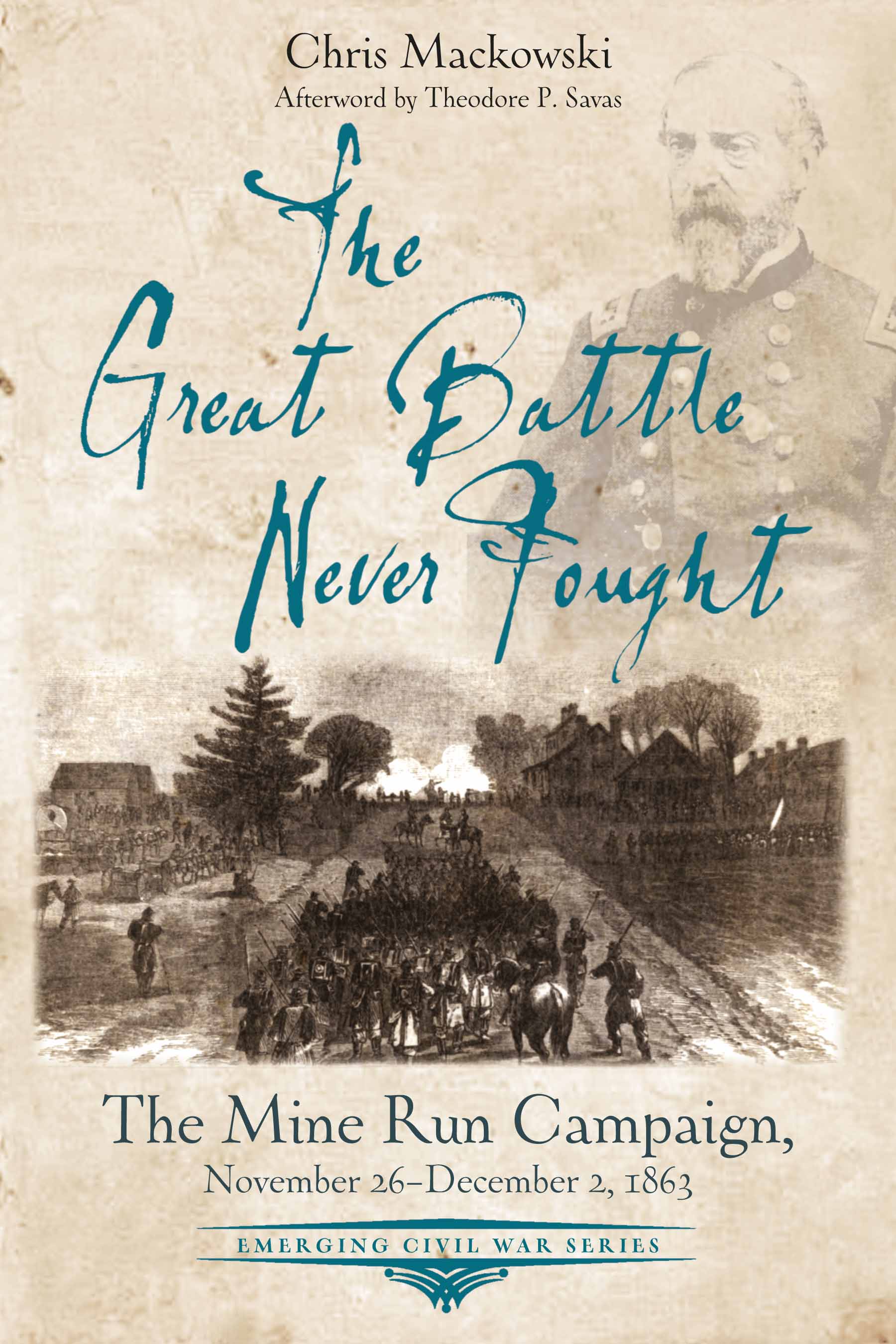 Just in time for the holidays, our historian-in-residence, Chris Mackowski, has a new book available: The Great Battle Never Fought: The Mine Run Campaign, Nov. 26-dec. 2, 1863. The book, part of the award-winning Emerging Civil War Series, recounts the final chapter of the forgotten fall of 1863—when Union Major General George Gordon Meade made one final attempt to save the Union and, in doing so, save himself.

According to the press release from the publisher:

The stakes for George Gordon Meade could not have been higher.

After his stunning victory at Gettysburg in July of 1863, the Union commander spent the following months trying to bring the Army of Northern Virginia to battle once more and finish the job. The Confederate army, robbed of much of its offensive strength, nevertheless parried Meade’s moves time after time. Although the armies remained in constant contact during those long months of cavalry clashes, quick maneuvers, and sudden skirmishes, Lee continued to frustrate Meade’s efforts.

“This book was a decade in the making,” Chris says. “It’s a topic I’ve wanted to write about for a long time, mostly because it’s been so overlooked. Because Mine Run was ‘the great battle that never happened,’ it was anticlimactic. As a result, history has tended to jump from Gettysburg in July 1863 to the Wilderness in May 1864. The entire fall of 1863 tends to get ignored.

“However, Mine Run lays all the groundwork for everything that unfolds in the spring of 1864: the promotion of Ulysses S. Grant to the position of general in chief, a reorganization of the Army of the Potomac, a reliance on defensive warfare by the Army of Northern Virginia, and a host of other things.

“This book looks at Mine Run through the lens of George Gordon Meade, who, I think, had his finest hour at Mine Run. Under incredible political pressure, he nonetheless refused to needlessly waste the lives of his men, at great peril to his own career. That took tremendous moral courage.”

Meanwhile, in Washington, D.C., Meade’s political enemies launched an all-out assault against his reputation and generalship. Even the very credibility of his victory at Gettysburg came under assault. Pressure mounted for the army commander to score a decisive victory and prove himself once more.

Smaller victories, like those at Bristoe Station and Rappahannock Station, did little to quell the growing clamor—particularly because out west, in Chattanooga, another Union general, Ulysses S. Grant, was once again reversing Federal misfortunes. Meade needed a comparable victory in the east.

And so, on Thanksgiving Day, 1863, the Army of the Potomac rumbled into motion once more, intent on trying again to bring about the great battle that would end the war.

Copies of The Great Battle Never Fought are available for order online at Amazon or, for an autographed copy, from Savas Beatie. Visitors to Stevenson Ridge can also pick up a copy in the office, where copies of Chris’s other books are also available. You can also read more about the book at Emerging Civil War.