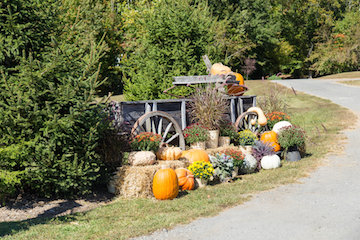 For all those Fall Lovers, you can now officially pull out your boots, sweaters, hot chocolate, and pumpkin-galore without being judged by others: the fall equinox officially arrives tomorrow, Saturday, September 22!

The fall in Virginia tends to be a very popular season because we get to experience the season change highlighted by great beauty in the trees. Virginians get to enjoy the local harvest festivals, pumpkin patches, apple picking, and so much more.

How to do other cultures celebrate this astronomical season?

In Greek mythology, the arrival of fall is known for the abduction of Persephone. She was a goddess who was abducted from her mother, Demeter, the harvest goddess, and taken to the underworld to become the wife of Hades. Eventually Demeter got her daughter back from Hades but only for nine months of the year. Every fall, Persephone would return to the underworld and, during these months, Demeter refused to use her divine skills to make plants grow, which explains the bare months of winter.

The most widely celebrated Christian celebration is Christmas, which replaced the Yule festival around the December solstice. The closest celebration to the September equinox is Michaelmas, also known as the Feast of Michael and All Angels on September 29. In this traditional celebration, not observed as much now, Michaelmas marked the ending of the harvest and the beginning of preparations for the following year.

At the precise moment of the autumn equinox, the sun shines directly on the equator, an enormous “snake of sunlight” slithers down the stairs of the main pyramid in Chichen Itza, Mexico. This ancient pyramid was designed using advanced astronomical calculations to determine the exact angle of the staircase.

Higan is a six-day Buddhist celebration in Japan during both the September and March equinoxes. Both celebrations have been national holidays since 1868. Higan means the “other shore” and refers to the spirits of the dead reaching the afterlife. It’s a time for towns to pay their respects to their ancestors.

The Moon Festival is celebrated in Chinese and Vietnamese cultures all over the world on the day of the Harvest Moon, which is the Full Moon closet to the September equinox. The festival celebrates the abundance of the summer’s harvest, and people serve mooncake filled with lotus, sesame seeds, a duck egg, or dried fruits.

“It is the summer’s great last heat,
It is the fall’s first chill: They meet.”
–Sarah Morgan Bryan Piatt