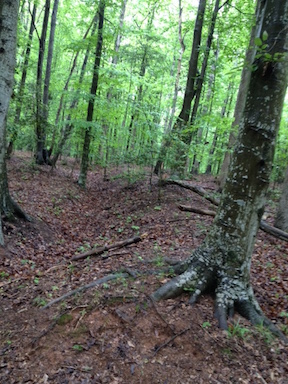 One of the best advantages to staying at Stevenson Ridge for Civil War buffs is that they can get a chance to see a part of the Spotsylvania battlefield that not many people get to see.

In their wake, the soldiers left extensive earthworks. Most of them were build by new troops following the army manual, so they look different than the works built by veterans on other parts of the battlefield.

They also dug an extensive system of trenches known as “covered ways.” These ditches let them bring supplies close to the front why still remaining protected by the topography as much as possible. That let them stay “under cover” (thus the name).

While covered ways were commonly used later in the Overland Campaign and during the siege of Petersburg, they were rare earlier in the campaign. The covered ways we have at Stevenson Ridge are, we believe, the first instance of their use in the Eastern Theater, so needless to say, we’re pretty proud of that.

Overall, our earthworks are in such great condition that an earthworks specialist with the National Park Service called them the best-preserved works in private hands. We’re proud of that, too!