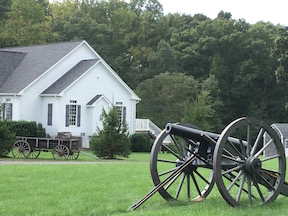 Details are shaping up for the Fourth Annual Emerging Civil War Symposium at Stevenson Ridge, which will be held August 4-6. Our theme this year is “Great Defenses of the Civil War,” and for the first time ever, we’ll be holding the entire event in the Lodge (because we’ve outgrown the Riddick House). Tickets are only $125 and include a whole slew of things, including this amazing line-up of Emerging Civil War speakers:

(ECW has posted previews of the talks on their website, so just click on the link with each presenter for more information.)

Dr. Kelly Mezurek—“Rebel Soldiers and Darkies on Guard over Them!”: Race, Retaliation, and Black Soldiers as Civil War Sentinels

Chris Kolakowski: “I Will Die Right Here”: The Army of the Cumberland at Stones River

Dr. Chris Mackowski (our historian-in-residence!): “We Must Strike Them a Blow!”: Lee’s Defense of the North Anna River

On Friday, August 4, we’ll hold our annual author/speaker “Roundtable Discussion” emceed by our own Chris Mackowski. Roundtable discussion topics will include our theme, “Great Defenses of the Civil War”; the legacy of these defenses; Lee, Grant, Jackson, Thomas, and other personalities; and more.

On Sunday August 6, we’ll do a car caravan tour of the Brandy Station Battlefield with Eric J. Wittenberg and Daniel T. Davis.

Chef Brad will be making lunch for Saturday, which is also included in the price of admission, as are Friday hors d’oeuvres (with a cash bar) and Saturday coffee service.