One of my super-powers, apparently, is my ability to find four-leaf clovers. I don’t go looking for them; instead, they tend to leap out at me.

I always think of the scene from the movie Rain Man when someone spills a whole box of matches and Dustin Hoffman’s character glances at them and then rattles off the exact number of matches on the floor. That’s sort of what it’s like for me spotting four-leaf clovers: i just glance, and there they are.

But today I found a rare five-leaf clover. I’ve found multi-leaf clovers that are more than four leaves before, but they’re a lot more rare and so a lot harder to find. I found this one behind the Corn Crib. It had been chewed up by the lawnmower, so three of its leaves are tattered–but still attached! 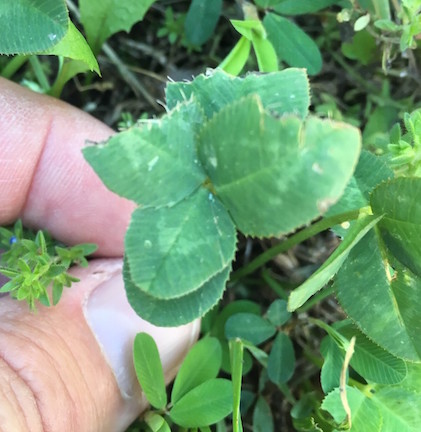 I found two four-leaf clovers today, too. Whenever I find one, I post a picture on my Facebook page if I can as my way of spreading the good luck around.