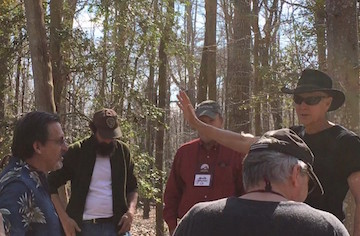 May 12 would see some of the worst fighting of the Overland Campaign—some would say of even the entire war.

Federals launched an attack against the tip of a horse-shoe shaped portion of the Confederate line that has since become known as the Mule Shoe Salient. For 22 consecutive hours, the armies locked in combat, much of it hand-to-hand, in the pouring rain. In some places, water filled the trenches up to the men’s knees, and the mud sucked down the wounded and suffocated or drowned them.

In support of the assault, Ambrose Burnside’s IX Corps was to attack the eastern base of the salient. Thus, the area now known as Stevenson Ridge became a staging area on May 11 for troops preparing to go into the May 12 fight. “[W]e formed into line of battle and moved forward a little to the right of the road running toward the court house,” a Pennsylvanian said. Then, just as dawn began to lighten the sky, then went into the fight.

Initially repulsed, Burnsides’ men fell back—not quite all the way to Stevenson Ridge—and then regrouped for a second assault. Tangled in the thickets and woods, the men lost much of their unit-level cohesiveness and instead began fighting in small groups and as individuals. Men called this type of fighting “bushwhacking.”

In the afternoon of May 12, both army commanders tried to relieve pressure at the Mule Shoe by launching attacks on the eastern front at a place called Heth’s Salient, named for Confederate General Henry Heth, who commanded the men ensconced in that part of the line. Neither knew the other was launching an attack, although both happened almost simultaneously. Confederates got the jump on the Federals and crushed their left flank, leading to yet another retreat.

Overshadowed by the fighting at the Mule Shoe, the fighting on Burnside’s front was nonetheless severe for many of the men engaged, some calling it some of the toughest fighting they’d ever engaged in.

And the battle of Spotsylvania Court House was not yet over.