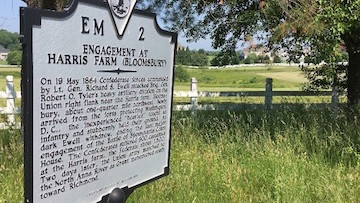 A historical marker along modern Rt. 208 marks the area where Confederates broke through the Federal supply line on Fredericksburg Road.

The main action on Spotsylvania’s eastern front opened on May 9 during the battle of the Ny River. Ten days later, in a fight that brought the battle full circle, the last major action of the battle also happened on the eastern front—or, more accurately, in the rear, rather than the front.

Robert E. Lee, discontent to remain on the defensive, looked for some way to strike a blow at Grant.

Following the failed attack on May 18 against the Confederate left, the Union VI Corps withdrew back to its original position southeast of the Fredericksburg Road. Lee sent his own Second Corps in a pursuit of sorts. Just as the VI Corps moved in a clockwise arc to get back into its position, the Second Corps moved in a parallel, wider arc. The Confederates’ objective: strike into Grant’s rear and disrupt the Federal supply line, communications, transportation, and other logistics.

At about 4:00 p.m., Ewell’s men accomplished their goal. After a brief encounter with several Federal units posted on the west side of the Fredericksburg Road, the Confederates reached the road itself. Their breakthrough occurred about a mile to the northeast of modern Stevenson Ridge, on the north side of the Ny River at a place known today as Harris Farm.

When Confederates got to the road, though, they found more than they bargained for—not only wagons full of supplies but regiments full of reinforcements. Grant, whose army had been diminished by more than two weeks of constant fighting, had ordered reinforcements down from Washington, D.C. The first regiments, fresh and large, had begun arriving on the battlefield just the day before, with more of them literally marching down the very road Ewell’s men tried to cut.

A four-hour fight ensued, with Confederates getting the worst of it because the sheer weight of Federal numbers crushed in on them. “The brigade took position in a wood, and although unprotected by any kind of works, and without the assistance of artillery, several [Confederate] attacks made with all the energy of desperation were repulsed,” said a member of the 15th New York Heavy Artillery.

As the green Federals held their ground, more seasoned reinforcements came to their aid from the V Corps, which had been straddling the Fredericksburg Road near Stevenson Ridge. Only darkness saved the Confederates, allowing them to slip away. “[T]he resistance proved too much for him,” the New Yorker said.

Grant had already made the decision to pull out of Spotsylvania, with a planned departure on the night of May 19. The Confederate attack at Harris Farm delayed Grant’s departure while he waited for any other signs of Confederate aggression.

And so, Grant ordered his army to begin preparations for the departure originally set for May 19. On the evening of May 20—after a 24-hour delay—the Union army would begin to pull out of Spotsylvania Court House and move around Lee’s right flank once more, just as they’d done in the Wilderness.