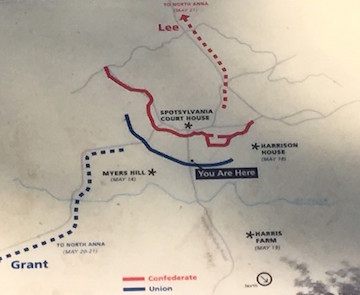 A map on a wayside panel in Spotsylvania National Battlefield shows the alignment of the armies during the second half of the battle, prior to their withdrawals from Spotsy.

Think of the village of Spotsylvania Court House as sitting at the center of a clock. Brock Road, where the armies first clashed on the morning of May 8, sits at roughly 10 o’clock. The Mule Shoe, scene of the horrific hand-to-hand battle on May 12, sits at roughly 12 o’clock (you can decide if that’s noon or midnight!). The Fredericksburg Road, where Burnside showed up on May 9, runs into the village at about 2 o’clock. By May 15, Grant had shifted the entire Union line all the way down to the Massaponnax Road, which runs into the village at about 4 o’clock.

Except, from Grant’s perspective, the road ran out of the village, to the southeast. That gave Grant a clear path to get around Robert E. Lee’s right flank, just as Grant had done at the Wilderness, and begin moving once more toward Richmond.

Grant didn’t much care about Richmond, but he knew Lee would have to come out from behind his defenses and stop Grant from capturing the Confederate capital. That, in turn, would give Grant the chance to crush Lee in open combat using superior Federal numbers.

Grant executed his move on the evening of May 20, sending his II Corps as bait toward Bowling Green. Corps commander Maj. Gen. Winfield Scott Hancock had the authority to go all the way to the North Anna River, cross it, and capture the Confederate rail junction at Hanover Station. With any luck, Lee would see the lone corps and make a move to pounce on it in its isolation—and then Grant would pounce on Lee when he did.

As the armies shifted away from Spotsylvania, they left in their wake a blighted landscape. Confederates suffered between 10,000-12,000 casualties, while Federals suffered nearly 18,000. Since the start of the campaign, Federals casualties had topped 36,000.

Coupled with the absence of practically the entire Federal cavalry corps—more than 10,000 troopers—and the soldiers required to guard the ever-lengthening supply train, Grant’s army would be down to almost 68,000 men by the time it reached the banks of the North Anna River on May 23. Lee, meanwhile, would see a small uptick in troops thanks to reinforcements from the Shenandoah Valley and Richmond, bringing his tally up to around 53,000. It would be the closest, numerically, the two armies would ever be during the entire 1864 Overland Campaign.

But the story of that battle along the North Anna River is a story for another time.