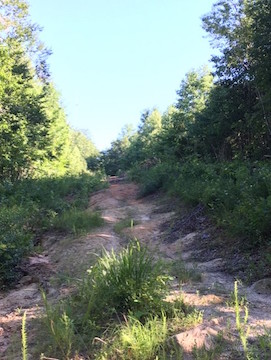 Looking up Myer’s Hill from near the Ni River. Initial V Corps attacks would have come from the right, moving uphill.

On May 14, 1864, Ulysses S. Grant planned to throw his V and VI Corps against the Confederate left flank in an early morning attack. As it was, Mother Nature worked against him. As his men tried to shift into their new positions, the rain that had started on May 11 continued to drench them. “The mud was dreadful, the night dark, we forded streams up to our knees, and the mud all the time was over our shoes,” said one Massachusetts soldier.

V Corps commander Maj. Gen. Gouverneur K, Warren, who took up his headquarters at the Motley House known as Whig Hill—directly across Route 208 from today’s Stevenson Ridge—tried in his official report to put as positive a spin on the movement as possible:

At 4:00 a.m. I was at the appointed place with about 1,000 men, and all that could be done was assault the enemy’s cavalry on a commanding position on our left,which we did and took. It required the whole day to get my command up and together again. A brigade of the Sixth Corps was sent to hold the hill, which we had taken, but the enemy drove it off. After that, I had it retaken with Ayres’ brigade.

The “commanding position” the action centered around was called Myer’s Hill. Had Federals been able to get into position there in time, they would have had open access to the Confederate flank and rear because Gen. Robert E. Lee, slow to recognize the threat, did not adequately respond.

Following Warren’s initial capture of the hill, the VI Corps brigade of Emory Upton occupied the position and Army of the Potomac commander Maj. Gen. George Gordon Meade road to the hilltop to inspect the situation. When Confederates launched a counterattack, they nearly captured Meade, who narrowly escaped by jumping the Ni River. His dander up by the near-capture, Meade sent elements of the V and VI Corps to re-take the hill.

Recently, the Central Virginia Battlefields Trust launched an effort to preserve Myer’s Hill. You can find out more about that effort here (and you can make a donation to help preserve the land at www.cvbt.org). I recently had the chance to walk the ground with Ted Schubel of Fredericksburg’s NewsTalk 1230; you can see the video here.

Myer’s Hill wasn’t Warren’s only excitement on May 14, though. “During the day,” he reported, “my pickets were withdrawn, and the enemy’s cavalry got into our hospitals before the wounded were gotten off, but they did no damage. They were unable to capture any of our trains.”