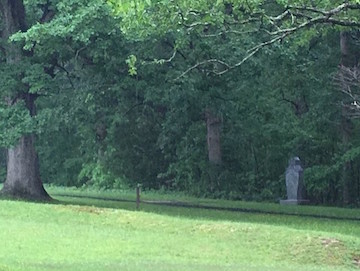 The morning of May 13 saw carnage across the Spotsylvania battlefield unlike anything the armies had before seen. Once the fighting at the Mule Shoe settled down and Lee settled into his new fall-back position, Union forces took stock of their situation. The cries and moans of the injured drifted across the muddy landscape and through the devastated forests. Otherwise, fighting quieted all along the line.

During the previous day’s fighting, Burnside’s men had shift westward for their assaults on the Mule Shoe and Heth’s Salient. That left some of their original works near the Fredericksburg Road thinly occupied.

Ulysses S. Grant decided to shift the bulk of his army toward Burnside’s former position astride the Fredericksburg Road. He could not get at Lee along the Brock Road or in the center at the Mule Shoe, so perhaps an opportunity existed against the Confederate right. After all, he reasoned, the Confederates had to be weak somewhere.

He cut orders for his V Corps, occupying a position along the Brock Road called Laurel Hill/Spindle Field, to shift eastward to the Fredericksburg Road. In doing so, the V Corps would disengage from its current position, slide behind the VI Corps and then the II Corps, then cross behind the IX Corps and into the IX Corps’s original trenches. The IX Corps, meanwhile, would consolidate its position.

Once the V Corps finished its move, the VI Corps would then disengage from its position and follow the V Corps eastward, eventually extending the line farther east and south. There, Grant saw an opportunity to capture a piece of high ground occupied by Confederates, known as Myer’s Hill. Possession of Myer’s Hill would protect the new Federal left flank and allow the Federal army to threaten Lee’s position—and perhaps even get into Lee’s rear.

Grant set his army in motion with an eye toward a dawn attack on May 14. Assault hadn’t allowed him to break Lee’s line, but perhaps maneuver would.