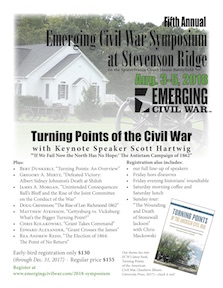 The full line-up of speakers has been announced for the Fifth Annual Emerging Civil War Symposium at Stevenson Ridge, which will be held Aug. 3-5, 2018.

The theme this year is “Turning Points of the Civil War,” which ties into an upcoming book Emerging Civil War is publishing with Southern Illinois University Press as part of their “Engaging the Civil War” Series.

The keynote speaker this year will be Scott Hartwig, former supervisory historian from Gettysburg National Battlefield. Scott, who’s been at work on an in-depth study of the Antietam Campaign, will address the implications of the battle and the resulting issuance of the Emancipation Proclamation in ““If We Fail Now the North Has No Hope:” The Antietam Campaign of 1862.”

Eight other speakers round out the line up. You can find the full list of speakers here. Plus, the Sunday tour this year will focus on the wounding and death of Stonewall Jackson at Chancellorsville, conducted by our own historian-in-residence, Chris Mackowski, co-author of The Last Days of Stonewall Jackson.

A couple houses are still available, but they’ve been going fast, so if you’re interested, contact us at info@stevensonridge.com. You can get more info about the Symposium, and reserve tickets, at Emerging Civil War’s website. Early bird tickets, through the end of December, are only $130.00.