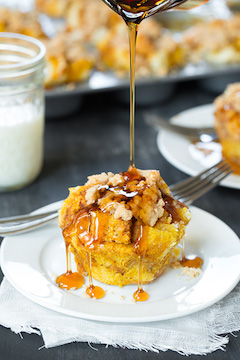 image and recipe courtesy of http://www.cookingclassy.com/2013/10/pumpkin-french-toast-muffins-cinnamon-steusel/

Maybe it’s the cool, crisp air, but over the last week or so, I’ve been a baking queen! I’ve made an apple pie, s’mores pancakes & dip, delicious brownies, and apple bread pudding. Or it might be because October is National Bake & Decorate Month!

October is the perfect time to take a step back and enjoy the seasonal ingredients and flavors that only come around once a year (yes, I have pumpkin-everything in my house right now).

Here is the next delicious treat I plan on making from my Pinterest board: