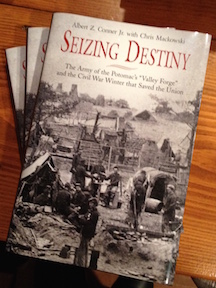 The Free Lance-Star ran an article Tuesday about the book Seizing Destiny: The Army of the Potomac’s “Valley Forge” and the Civil War Winter that Saved the Union, which was co-authored by Stevenson Ridge Historian-in-Residence Chris Mackowski. The newspaper article was written by veteran writer Clint Schemmer.

Seizing Destiny, which was written by the late Albert Conner, Jr., looks at the major transformation of the Union army during the bleak winter of 1862-63—period of the Civil War that historians have usually overlooked.

Chris assisted with rewrites of the manuscript. “It’s Al’s book, though,” Chris says. “He compiled one of the most impressive collections of research I’ve ever seen.”

Conner passed away earlier this year after a lengthy illness.