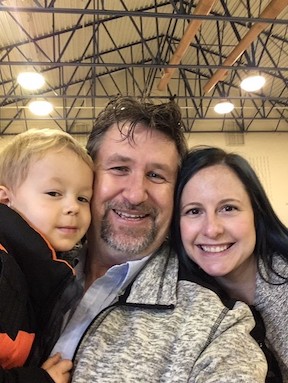 It’s election day in Virginia, one of the few states to hold “off-year” elections (meaning they don’t coincide with Congressional and/or the Presidential election).

The entire Virginia assembly is up for reelecction, as it is every two years. We also had to choose a state Senator, a school board member, a county supervisor, and several other county officers, including sheriff, treasurer, commissioner of revenue, and commonwealth attorney.

While it’s easy to fixate on presidential elections, local politics actually have a more direct impact on a person’s daily life, so it’s important to vote in local elections.

Jennifer and I went to the polls together today, and we took our two-and-a-half year-old son, Maxwell, with us so he could see what it was all about. We asked him after breakfast if he wanted to go vote with us, and he shouted, “Yes!” He doesn’t really know what it’s all about, but I’m glad he was eager and curious.

We drove down to the local elementary school where our district polling place is located. Campaign signs littered both sides of the road, trying to cram last-minute name recognition into voters’ heads as they get to the polls. Outside, members of both major political parties offered us “sample ballots” that had their preferred candidates’ names already filled in. We politically decline, instead focusing on Maxwell’s excitement.

Inside, Jenny and I sat in voting booths next to each other and Maxwell sat on my lap, and the three of us talked about how to vote. We still use paper ballots with fill-in-the-circle spots that a machine reads and counts (similar to the old SAT tests), so we showed Maxwell how it works. After, Maxwell helped his mommy put her ballot in the voting machine. The election referee gave all of us “I Voted” stickers (although, for the record, Maxwell did NOT vote—this isn’t old-school Chicago, after all…).

If there are elections in your area, we hope you vote today, too.