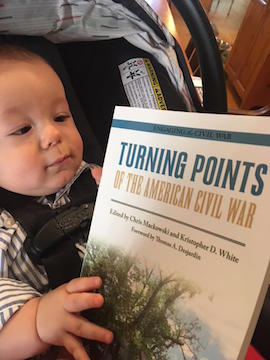 If people know anything at all about the Civil War battle of Gettysburg, they usually cite it as “the turning point of the war.”

But a new essay collection co-edited by our historian-in-residence, Chris Mackowski, suggests that maybe Gettysburg wasn’t “the” turning point at all. Instead, the book argues, what if the war was actually a series of major turning points, one leading to the next, in a continuum?

Turning Points of the American Civil War is the first volume in the new “Engaging the Civil War” book series published by Southern Illinois University Press in partnership with Emerging Civil War (ECW). Kristopher D. White, who co-founded ECW with Chris, serves as the book’s co-editor.

Chris is a professor of journalism and mass communication at St. Bonaventure University. Read the university’s press release about Chris’s new book (which is out just in time for Christmas and makes a perfect gift for the Civil War buff on your list):
“Turning Points” features essays from 10 historians that examine key moments of the Civil War and explain why they were significant game-changers.

• “Confidence Renewed: Surviving Bull Run and the Birth of the Army of the Potomac” by Robert Orrison
• “Unintended Consequences: Ball’s Bluff and the Rise of the Joint Committee on the Conduct of the War” by James Morgan III
• “Defeated Victory: Albert Sidney Johnston’s Death at Shiloh” by Gregory A. Mertz
• “‘The Heavyest Blow Yet Given the Confederacy’: The Emancipation Proclamation Changes the Civil War” by Kevin Pawlak
• “The Cresting Tide: Robert E. Lee and the Road to Chancellorsville” by Kristopher D. White
• “Vicksburg: The Victory That Unleashed Ulysses S. Grant” by Daniel T. Davis
• “‘Oh, I Am Heartily Tired of Hearing about What Lee Is Going to Do’: Ulysses S. Grant in the Wilderness” by Ryan Longfellow
• “‘Far Better in the Present Emergency’: John Bell Hood Replaces Joseph E. Johnston” by Stephen Davis
• “The Point of No Return: Turning Points within the 1864 Presidential Election and the Doom of the Confederacy” by Rea Andrew Redd

The book’s conclusion, written by Mackowski, suggests Lincoln’s assassination might havebeen the war’s final turning point, dramatically affecting the peace and the manner in which postwar Reconstruction played out.

The foreword of the book was written by noted historian Thomas Desjardin, formerly of Gettysburg National Military Park and current commissioner of education for the state of Maine.Desjardin explains that Gettysburg has become known as “the” turning point of the war largely through the efforts of politically powerful men who had vested interests in defining the war that way. Their ceaseless public relations efforts after the war went a long way toward shaping public attitudes.

The book is also innovative in the way it connects with Emerging Civil War’s online presence. The book’s readers can scan a QR code in each chapter that will take them to a page at Emerging Civil War devoted specifically to that chapter of the book. Those pages feature special commentary by ECW’s chief historian, Christopher Kolakowski, and the book series’ co-editor, Brian Matthew Jordan, along with related images, links to additional resources, and other pieces that are in conversation with the book’s essays. More than a dozen other historians have contributed online pieces that supplement the book.

Coming in at 272 pages, with 31 illustrations — including 10 original maps — “Turning Points of the American Civil War” has a list price of $24.95 for paperback or ebook.