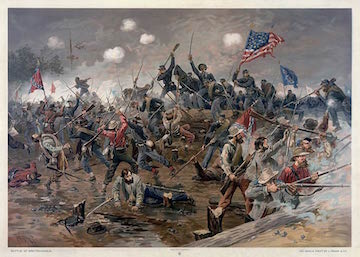 We’re not shy to the questions “Is Stevenson Ridge haunted?” The answer you’ll receive will solely depend on who you ask in the office.

Even if you don’t believe in ghosts, it’s still fun to talk about ghost stories this time of year. So let’s share a ghost story from the Spotsylvania Courthouse—one of the bloodiest battles in North America.

Fredericksburg and Spotsylvania National Military Park has attracted many ghost hunters over the years, and they’ve claimed to find evidence of electromagnetic field readings and sightings. Readings have been gathered at the Stonewall Jackson Shrine while others share that a young female ghost has been seen wandering the grounds of Chatham Manor.

The park’s most active area has to be the Bloody Angle at Spotsylvania. Ghost Hunters Mark Nesbitt and Patty Wilson have investigated the site several times and have allegedly captured serval very impressive EVPs (electronic voice phenomenon) with spirits who want to share their stories. There is a frequent thick, spectral fog around the battlefield, adding more to its spookiness, and some people have claimed to see soldiers emerge. During Civil War reenactments, it’s not uncommon to hear the sounds of disembodied cries, screams, and gun fire around the trenches when none are performing.

Is it real or not? What do you believe in?