With the advent of May, Civil War season has kicked off around these parts! 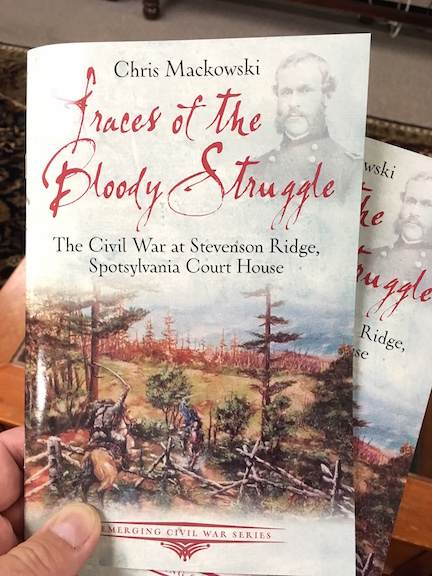 Next week, our historian-in-residence, Chris Mackowski, will participate in a variety of Facebook LIVE events to commemorate the start of the season.

Then, starting on Tuesday, May 7 and running through Thursday, May 8, Chris will join the American Battlefield Trust for a series of Facebook LIVE broadcasts to commemorate the 155th anniversary of the 1864 Overland Campaign. On Tuesday, they’ll be in the Wilderness. On Wednesday, they’ll focus on Spotsylvania. On Thursday, they’ll head down to the North Anna River. (On Friday, they’ll broadcast from Cold Harbor, although Chris has to go to NY to give a final and so won’t be heading to the gates of Richmond.) You can follow along on the American Battlefield Trust’s Facebook page.

Of course, we have plenty of our own Civil War history at Stevenson Ridge, too. Don’t forget to pick up a copy of our special publication, Traces of the Bloody Struggle: The Civil War at Stevenson Ridge, Spotsylvania Court House, available by special order for only $10 plus shipping. Email us at info@stevensonridge.com!