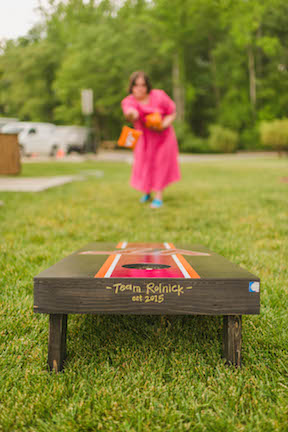 Everyone at the Ridge loves a good game of cornhole, and we frequently see it at weddings and events during the warmer months—but how did cornhole even begin?

In a 1883 patent described by Heyliger de Windt, his game “Parlor Quoits” has similar rules as the modern game of cornhole but with a square hole instead of a round one. It was the first game to use bean-bags and the slanted board with a hole as the target, although “Parlor Quoits” was game more suitable for an indoor environment—the parlor, as the name inplies.

The game was later sold to a Massachusetts toy manufacturer, and they coined the name “Faba Baga.” Unlike the cornhole we know today with one hole and one size of bag, this new game had two different-sized holes, worth different point values similar to skee-ball.

It wasn’t until 1974 that we started seeing the modern game of cornhole. It gained popularity as “bean bags” or “bags” in Chicago after a DIY tutorial for the boards was published in local magazine. In the late ‘70s and early ‘80s, this fun and familiar game spread all over the northcentral and worthwest regions and, form there, continued its spread all over the United States. Now you can see cornhole at most gatherings and popular events thanks to ESPN and tailgating. It’s a great way to spend an afternoon socializing with family and friends.