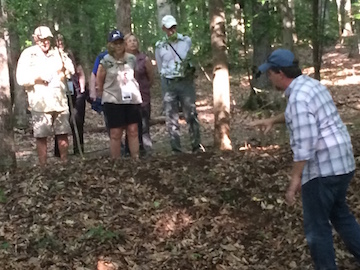 Last week, we had a little “old New England” come to Stevenson Ridge: a busload of alumni from Yale University. The Yale alumni group was following the Overland Campaign with historian Brian Matthew Jordan (a Yale alum himself). Brian was a finalist for the Pulitzer Prize in history in 2016 for his excellent book Marching Home: Union Veterans and Their Unending Civil War.

As part of his daylong tour of the Wilderness and Spotsylvania, Brian wanted to offer the Yale alums something that was a little off the beaten path, so we set up a stop at Stevenson Ridge. The busload of Civil Warriors followed me into the woods and down to our main stretch of earthworks, built on May 9 and 10, 1864, by members of the Federal IX Corps. They’re different than anything seen elsewhere on the Spotsylvania battlefield.

I also brought the group back to a set of “covered ways” we have on property. Soldiers dug trenches behind the lines that would allow them to bring supplies to the front while remaining under the protective cover of the terrain. The covered ways built at Stevenson Ridge are the first known set built during the Overland Campaign.

Next month, we have a group of college students coming from Texas to look at our works, and of course, our Fourth Annual Emerging Civil War Symposium at Stevenson Ridge is coming up Aug. 4-6. Brian will be back then as the keynote speaker of the event. We’re looking forward to having him back! 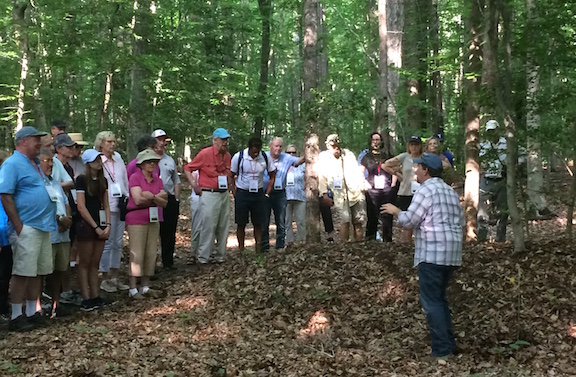